Go for “Fit” Instead of College Selectivity: Here’s Why! 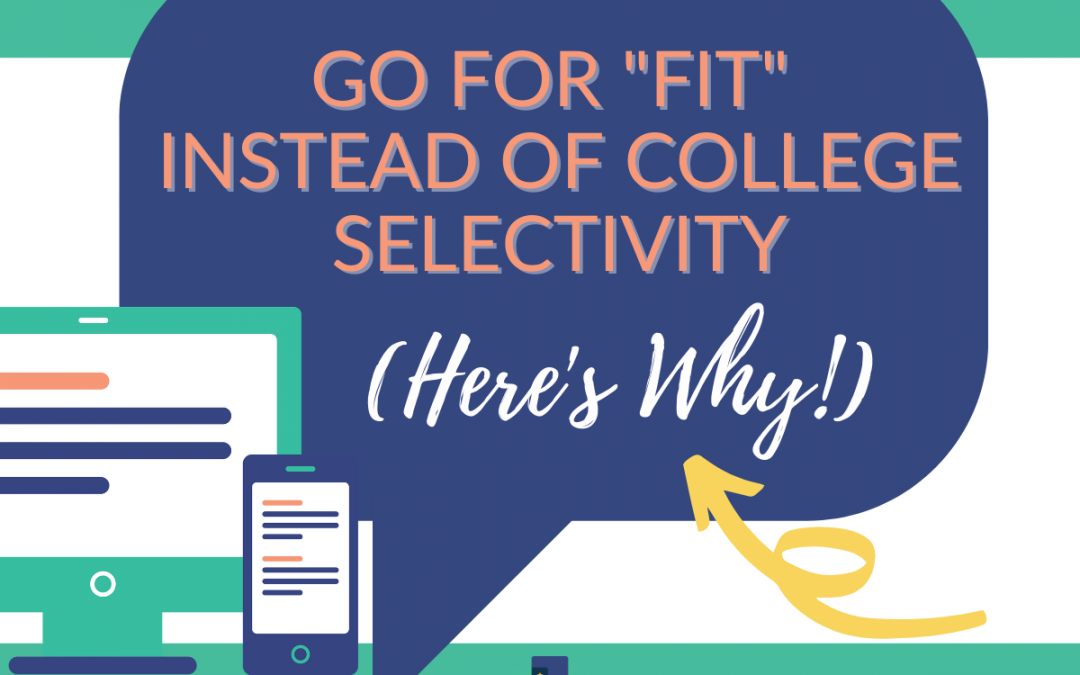 Move over, Yale and Harvard.

Not everyone needs to (or should) shop for a top-name school. You can still find lots of high-quality colleges and universities among the elites.

Gems glisten everywhere. Don’t discount the liberal arts college down the street because it may be able to offer a connection that you can’t find anywhere else.

A Stanford study says “fit” is more important than rankings. I really do believe too many students and families rely on college rankings published by well-known organizations to define quality. The higher the ranking doesn’t mean it’s the best fit for your child. The study found that the “metrics used in these rankings are weighted arbitrarily and are not accurate indicators of a college’s quality or positive outcomes for students.”

Do I even need to write any more?

I chatted with Laurie Kopp Weingarten, president and chief educational consultant at One-Stop College Counseling, and she told me a great story.

“Several years ago I had a straight-A student with strong test scores and interesting extracurricular activities who was a bit lacking in self-confidence. She felt strongly that she should attend a college where she would be the ‘big fish in a little pond’ instead of the ‘little fish in a big pond.’ It was very important to her that she choose an institution where she would be at the top and be recognized as a superstar.

She set her sights on a public university with a 70% acceptance rate. She did apply to other colleges, including those that are much more selective, and was actually accepted into every school she applied to. However, she stuck with her plan to attend the public university.

In this case, she didn’t feel up to attending a highly selective university where the competition would be fierce. Instead, she decided to choose a school that isn’t overly competitive and where she would stand out. It paid off with lots of internships and job offers, and it built her confidence.”

Yessss! This is exactly what I’m talking about.

Most people think the only reason your child would want to look for a non-selective college is because you couldn’t hack it due to poor academic achievement. Not so. There are lots of great reasons to opt for a less-selective institution.

1. Your Child May Be More Likely to Get In

Obviously, the fact that your child can get in is one of the reasons to apply to non-selective colleges.

That may be the extent of a college’s requirements! You can also call an admission counselor for more information about specific college selectivity.

Make no mistake — it’s a challenge to get through organic chemistry at just about any college or university. Lower selectivity institutions definitely offer rigorous coursework.

Just because your child’s valedictorian of her high school class or achieved a 34 ACT doesn’t mean that she won’t feel challenged at a lower selectivity institution.

3. Your Family May Experience More Personalization During the Admission Process

Less selective schools must work a little harder for their students. That means you and your child reap the benefits. In other words, highly selective colleges and universities don’t have to work nearly as hard to recruit students — they naturally come to them. That means that less selective institutions must do the hard work of calling, emailing, texting and even engaging students on social media.

We made the college search process a personalized experience — and that might just happen if you’re looking into a less selective institution.

Chances are, your child won’t have to worry about a complicated application process if he or she is looking at a less selective institution. Here’s a quick overview.

An admission committee will only review your child’s application as soon as all required information is in. Colleges that use a rolling admission policy usually notify applicants of admission decisions quickly. (Students learned of an admission decision within two weeks at our college!)

Rolling admission decisions are non-binding. This means that your child will not be required to attend that school and will not need to make a decision until May 1, which is National Candidate Reply Day.

Your child probably won’t encounter these types of admission at lower selectivity institutions:

You’ll typically find lower selectivity institutions in areas that also include lower costs of living (not big urban areas). The savings on rent and tuition might be worth it.

“We had a student who wanted to study business. Although she was accepted at multiple selective programs, she chose to study at Bentley University (45-50% acceptance rate), where they placed her into the honors program, provided her with a large scholarship, and of course, she received all the perks that came along with the honors program. She loved feeling like she was the top of the class!” says Kopp Weingarten.

Kopp Weingarten also said, “We also had a student who chose a large public university in the Midwest where she could use her AP credits to get advanced standing, basically entering as a sophomore. She graduated in three years, saved tons of money and was accepted into a top-tier Ph.D. program.”

6. College Selectivity is Not a Reliable Indicator of Learning, Job Satisfaction or Well-Being

The Stanford study found no significant relationship between a school’s selectivity and student learning, future job satisfaction or well-being. Furthermore, the study found only modest financial benefits of attending more selective colleges — and that applied to first-generation and other underserved students.

Individual student characteristics (background, major, ambition) may make more of a difference in terms of post-college outcomes than the institutions themselves.

7. Learning Engagement is Most Important

Students’ learning among a campus community may offer the key to positive outcomes after college, according to the Stanford study. For instance:

8. Grades May Be Higher

Your child may be more likely to graduate with honors at a less selective institution.

“When students apply to medical school, the two most important aspects of their applications are their GPA and their MCATs,” says Kopp Weingarten. “We had a student who felt it might be difficult to maintain a high GPA at a highly competitive college where everyone was aiming for ‘A’ grades. He chose to attend a college where he felt he could keep his GPA high due to the lower competition at the school. Due to the fact that he was at the top of their admit pile, he received a huge scholarship and only paid about $10,000 a year for a private college. It worked out for him because he graduated with a near-perfect GPA and was accepted into medical school. He then had the money he saved to put toward paying for medical school.”

The main drawback of graduating from a less selective college is brand recognition. However, there are other things to think about, such as whether your child actually ends up graduating. Plus, if your child plans to go to graduate school, nobody cares where he or she goes for an undergraduate education.

Colleges with higher selectivity are also much more likely to graduate students than those with lower selectivity. However, once your child does graduate, there’s little difference in life outcomes, as the Stanford study suggests.

“Sometimes, the most highly selective schools can open the door for a candidate (job or graduate school). But what really matters is how well the student performs at the school they are at. The school doesn’t make the student successful — it’s up to the student to do that on their own,” says Kopp Weingarten.

Tip: Check the financial solvency of institutions your child is interested in (particularly those small private colleges that were already in trouble before the pandemic). Some have already closed. Attending a lower selectivity public school is less of a risk because if those institutions close, students will still be a part of the state system.