8 College Admission Types (And the One that Works Best for Your Senior!) 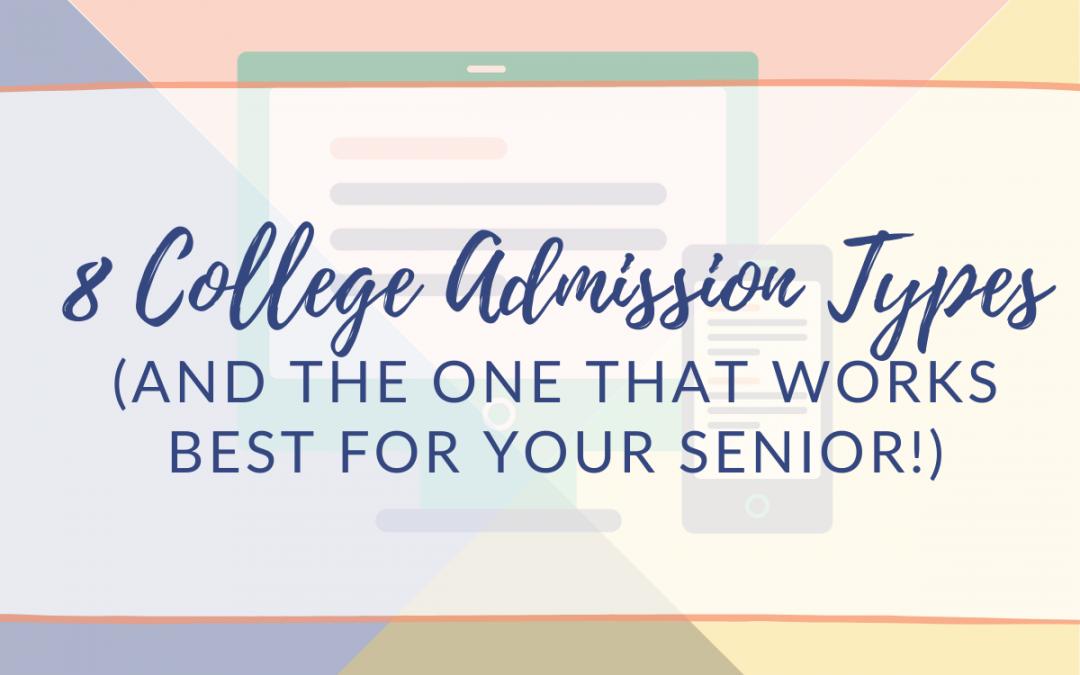 It’s time for seniors to get that admission ball rolling, and now’s the time to start.

One of the things I wish would be easier to understand are the different types of admission available at all schools. (I also wish there was one standard financial aid award that looked the same nationwide.)

I worked in the admission office of my alma mater for 12 years and we had rolling admission. This means that we’d accept applications as they came in, without an application deadline.

In other words, if you applied in September of senior year, you could get admitted just as easily as if you waited to May of senior year. The perks to rolling admission is that you don’t have to worry about a deadline date.

However, the downside is that your child doesn’t have a deadline. It’s often easier to make sure your child actually gets the application done when there’s a hard-and-fast deadline.

There are no right or wrong answers (kind of like choosing a major) but there are definitely types of admission that match best with your child’s personality. Let’s dive into seven different admission types and figure out which one is best for your student.

Best for: Students who want flexibility with their admission decision and don’t want to have to commit to a school early.

As I mentioned before, our college participated in rolling admission. Rolling admission means a college releases admission decisions regularly — sometimes daily — instead of sending them all out on one target date.

An admission committee will only review your child’s application as soon as all required information (such as high school records and test scores) has been received, rather than setting an application deadline and reviewing applications in a batch. Colleges that use a rolling admission policy usually notify applicants of admission decisions quickly.

If you apply earlier, you’ll receive your decision earlier. iming is important when applying to schools with rolling admissions. As classes fill up, fewer spots remain.

Best for: Students who are unhurried throughout the college search process or who want to take their time to compare schools and financial aid awards.

Best for: Students who don’t have stellar academic performance, those who want to save money by going the community college route for two years.

You may have already heard of the terms “early action” and “early decision” and may be a little curious about what they mean, particularly for parents of underclassmen. The tricky thing about some early admission programs is that your child may be required to attend that school. It’s great for the colleges because they get early commitments from students and Let’s go over these types of admission in a little more detail.

Early action means your student has the option to submit an application before the regular deadline. It’s a great way to get an admission decision from a college much earlier than usual.

One of the most flexible parts of early action plans is that they are not binding, which means that your child is not required to attend that particular college through this type of admission. Some colleges have an early action option called EA II, which involves a later application deadline than the regular EA plan.

Best for: Students who have done their homework for the college search. The advantage to early action is that they know they’ve been accepted to college as they apply to other schools during the regular application period. In other words, they want to know they can relax a little bit.

Best for: Students who choose to go the early decision route know they want to go to one school and one school only. As a family, you must be comfortable with the financial aid award and know that your student can’t entertain any other offers from other schools.

Best for: Students going the Ivy League route. This isn’t a common admission type unless your child is applying to a highly competitive school.

Admission offices may advise your student in writing of the likelihood of admission — whether it’s likely, possible or unlikely — no earlier than October 1 of your child’s senior year in high school. If a school indicates it’s likely, it’s similar to an acceptance — as long as your child keeps the same academic and personal record reflected in the completed application. The college will send a formal acceptance on the appropriate notification date.

Let’s say your student is lucky enough to get one or more such written communications. If your child has made a decision to go to one school, he’s encouraged (but not required) to notify all other institutions and to withdraw all other applications.

Permission from a college that has accepted you to postpone enrolling in the college. The postponement is usually for up to one year. Here are the steps to taking a gap year:

Tips with COVID-19 in Mind

Ask colleges about their admission procedures and whether they’ve changed them in the wake of COVID-19. It can also be a challenge to get all those rganized, so add them to the spreadsheet I’ve created for you and your student!